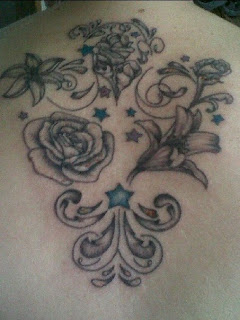 It has been a while since I last posted. A while ago I tweeted that I finally watched my friend get the tattoo I designed for her. It was a very surreal experience. Firstly it was the first time I watched one get done. Secondly she is going to have that on her forever. I still can't wrap my head around it. Here is the finished piece a day or so after it was done (fantastic tattooist too)
Posted by Hymera at 01:40 1 comment:

My writing has been left to go into hibernation for the time being as sad as I am to admit. However the artist in me has sensed the spring air and is ready and raring to get out and about.
As such in the matter of a few weeks I have got three different art projects on the go. Funnily enough all came out of luck and coincidence.
The first project is for Sawyer Perry (read his blog here http://sawyerperry.blogspot.com) I emailed a while ago when I felt the artists itch (well that sounds disgusting) and asked if he was still looking for someone to draw his characters for his book (I have read several chapters and loving it) He accepted and we have been emailing back and forth ever since.
The second is a tattoo I'm designing to order for a work friend. I was actually drawing Sawyers pieces in the office when she grabbed my sketch book. Long story short after my stuff being passed around much to my embarrassment she asked if I will design her tattoo. I'm nearly done on this, it is quite large and elaborate and obviously I want to get this perfect. In a few weeks she will be getting it done and I have been invited to watch.
The third is for another book but I won't go into much detail yet as it is still very new.
I am really excited to be doing this again. I was put off by art for a while after my A level teacher almost crushed my imagination because it didn't follow certain artists style. Look out for more posts soon while I dig out my scanner!
Posted by Hymera at 03:16 1 comment:

I suppose you could call it a News Years resolution of sorts, although I am not keen on them and have never up held them. So perhaps this isn't one, just a personal resolution.
For too long I have been telling myself 'I would love to be a writer', 'I wish there was a book like this' etc. I imagine a fair few people have thoughts like this. Something has held me back and this is a little thing called confidence. I have read so many fantastic books and feel I can't ever reach the same levels of creative genius. I probably won't, I can distinguish between fantasy and reality and not going to live on false hope. However I should not let this stop me writing. I'm not going to go anywhere if I don't actually write.
If you are reading this you are probably thinking 'well duh Hymera of course you aren't going to achieve anything if you don't actually do stuff' I agree with you wholeheartedly. But confidence is a fickle thing.
So to get over this I have made small steps to writing the book in my head thats waiting to burst out. The writeanon forum is also a fantastic friendly place I frequent, so get yourselves there as soon as! Along side this I'm reading several books on writing, usually I loathe doing this as I find them fairly boring. However I found a great set of books, Write Great Fiction. The first I'm reading is Plot and Structure by James Scott Bell. It truely is a great book (someone should tell him I'm advertising this book) Its an easy read, straight to the point. Reading his background was really inspirational, he started off going to college doing something completely unrelated to writing novels but gave it a shot. It has made me realise that there is hope for this cynical sociologist yet
Posted by Hymera at 03:13 3 comments:

The modern man is a slug?

Yes he is, according to Daily Mail writer Liz Jones. I do not joke friends, in an article published in the Mail on Sunday I read this piece The Modern Male. I frequently read the Daily Mail simply because it is there in front of me. Please take the time to read it and also the comments people have posted because after reading this article they put some of my faith back in humanity.

'Some Tutsi men in Rwanda were able to jump higher than the current world record of 2.45m, Roman legions completed one-and-a-half marathons a day (bear in mind this was before Lycra and bottles of water with teats had been invented)'
Credit to the woman, she has started her argument with some scientfic evidence but then tries to use this evidence against modern man to show how lazy they are. I would like to point out, modern society no longer needs us to jump away from danger, to hunt down terrific beasts. Technology and society has developed in such a way that we have no need to do such things. She is trying to call men lazy by refering to past societies where they had to be fit in order to actually survive.

'Isn’t it interesting that while we women look up to Amazonians with amazing biceps such as Michelle Obama, men have the presenters of Top Gear as their heroes – armchair Lotharios who don’t even have the upper body strength to comb their own hair.'

I find the mention of role models very interesting indeed. She talks of how men idolize presenters while women look up to strong female role models. There are a few things wrong with this. Many, many men look up to great sporting legends such as David Beckham who are very far from the 'armchair Lotharios' she describes. Then let us consider this further, isn't brain greater than brawn? What is wrong with idolizing individuals such as Stephen Hawkings or even Stephen Fry? The latter overcoming great personal problems to get to where he is today, now that is amazing. Personally someone who has brains is worthy of far more respect than someone who simply looks beautiful. Another point one has to consider is whether striving towards physical perfection, like some very thin models, is actually healthy. Many young girls have eating disorders because they are trying to live up to these unrealistic goals. Too many people like Liz Jones seem to emphasize too much on looks.

'These men might all wear trainers and tracksuits and workwear such as denim jeans and combat trousers, but it is all just dressing up, an illusion, a hark back to the days when men actually knew how to do physical things like, ooh, I don’t know, put in a light bulb or change a duvet cover or make love to a woman.'
This paragraph alone I feel shows a woman who is extremely bitter, probably having had poor relationships in the past where the men may have been a bit useless. However, she should not be using her personal experiences and argue that every man is like this, it just isn't true.

'I wonder why it is that gay men like to stay in shape, and be all smooth and oiled.'
This is a serious journalist seems to be straying into the land of stereotypes. But it doesn't end there, she becomes even insulting when talking about the modern hetrosexual male: ''he types with one finger (men have not yet evolved sufficiently to be able to touch-type)'

I admit I was sickened to read such things and I'm not even a man! This article doesn't seem to offer any insight into the male mind but instead seems to demonstrate how bitter this woman is. Who has used a good half a page to outright insult every man on this planet in the most degrading ways possible. She actually shames me in being a woman.

Men you aren't wastes of space and I'm sure many other women will agree with me
Posted by Hymera at 08:23 1 comment:

Blogs are a curious thing

I have a number of reasons for doing one:

Admitedly not all the reasons are good ones but maybe something good will come out of this. I would love to write a book in the future but my writing skills are probably very poor. As well as writing short stories I hope this will also enhance my skills in some way. Well one can hope.

Some days I may be strcuk by the urge to write about something intellectual and some days not so much. My mind is a multi track thing and this blog will probably show you just how disorganised it is

Welcome to my blog!
Feel free to read and comment on any of my posts including my short stories. If you want to ask questions just direct message me and I will reply as soon as possible